Ten years ago.  The years have past in the blink of an eye, but ten years ago I rode in my first Iron Butt Rally.  In just over ten days, I will be competing in my fifth IBR.  After nearly 18 months of bike preparation, the 2013 BMW GS Adventure is finally ready to head out for Albuquerque.  The final addition will be the set of new tires waiting at the start.  After that, the only thing left to do will be to ride.  After all the preparation, I am looking forward to the riding part.

After having skipped the 2013 Iron Butt Rally, I am not sure I have any expectations for this year’s effort.  I guess the best I can hope for, is to finish safely and to not embarrass myself too badly.  No matter what happens, Nancy will be blogging during the Rally with her own perspective over the next couple of weeks.  For those that will be in Albuquerque, at the start or the finish, I hope to see you there.

The Iron Butt and Rally and the Partridge Family.  Sometimes things just don’t seem to go together.

Most people would say my taste in music is eclectic at best.  But growing up I loved the music of the TV family that shot to fame trying to make ends meet rehearsing in the garage of their home.  I bought the albums and watched all the shows.  I could not have cared less that the group was a TV invention, nor that they did not create or play their own music.  Shirley, Keith, Laurie, Danny, Chris, Tracy and Ruben.  I loved them all.

Tomorrow I head out for the 1700 mile trek to the start of the 2015 Iron Butt Rally.  Plenty of time to meander and flower-sniff along the way.  Before I return home in three weeks I should have around 16,000 miles in the saddle, with a BeadRider, of course.

So, as teenage heartthrob David Cassidy sang to all those fans so many years ago, “Point me in the direction of Albuquerque.”

New tires to start the rally. 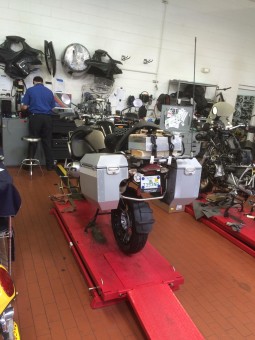 I am just about all done with the 2015 Iron Butt Rally, other than that pesky riding the motorcycle thing.  In reality, nearly every rider spent way more than 11 days getting ready for the Rally so all that’s left to do is ride.  And there might be some time spent on routing as well.

Most riders went through all the necessary inspections today.  There were some problems for a handful of riders, but fortunately, I was not one of them.  By 10:30 Saturday morning, I was done, with nothing else to do, or so I thought.

In every previous IBR that I have ran, I carried a National Parks Pass with me.  The pass allows you free entry into any National Park in the Country and can save you a lot of time, should you need to visit a park for a bonus.  And of course, I never used the pass one time in all those rallies.  This year, I made a conscious decision to forgo purchasing the pass since I had never used it.  I am guessing this is sort of like washing your car and guaranteeing rain.

The poster for the theme of this years’ Rally was unveiled today and of course it hints at a lot of National Parks in the riders’ futures.  Not such a smart decision on my part to not get the Pass this time around.  Fortunately, Petroglyph National Monument is located only 20 minutes from the Rally Start.  So after finishing all my paperwork and inspections, I hopped on the bike and rode over to the Park.  An hour later I was back at the hotel with my newly purchased National Parks Pass safely tucked in a jacket pocket.  This probably guarantees there will be no National Parks on the Rally, but it is one less thing to worry about.

The first IBR report is now up on the IBA website.  The phrase that jumped out at me and several other riders is that we will be presented with “several hundred” bonuses Sunday evening.  If that is an accurate number, routing will be impossibly complicated and time consuming.  Let’s hope this number of bonuses is at least a slight exaggeration.

BeadRider seems to be well represented on the Rally bikes.  By my very unofficial count, about 20% of the riders have our beads on their bike.  The majority have gone with our Ultimate seat.  I hope all of them have a kool and comfortable ride.

Nancy will be taking over the blog after this post.  Tomorrow, the very serious business starts.  I hope to see every rider safe and sound, albeit somewhat tired, back in Albuquerque a little over 12 days from now. 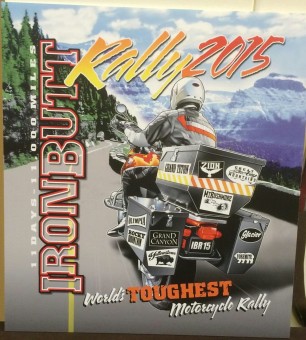 Day two of the rally and looks like Chris is off to a much better start than the last rally.  The very first day of the 2011 IBR Chris rode through torrential rain for an extended time.  That pesky rain soaked through his connections for his telephone, so he could only hear, not speak.  He would click the telephone until I guessed what he wanted to know.  Talk about stressful!

So far, the weather has been good, no technical problems, and yes, thankfully, no telephone problems.

Nearly all the bonuses are daytime only, which should mean he can get some rest at night.  Today he also has to take a rest bonus stop so that should help as well.

Yesterday Chris spent the day traversing through Montana to Glacier Park.  We rode our bikes out there several years ago with two great friends, Tina and Rob Hollaender, quite beautiful  His trek to get there was a little stressful.  Just follow the GPS, what could go wrong.  Back roads, no gas stations, and running low on fuel, no problem. Just follow the GPS.  He finally reached a gas station with a small amount of fuel left between the bike and his auxiliary tank.  Long ride into the park, and a long ride out of it again.  Check that bonus, move on to the next.  Lets head to Yellowstone.

A lot of deer on those roads, as Chris found out early this morning.  One jumped out from the side of the road.  Break hard, and a miss.  Yellowstone was another place I wanted to see on our ride west.  During our ride there were mud slides in the park closing off alot of roads.  It was the end of the day and we just could not ride any further to see “Old Faithful”.  So Chris’ orders from me are to snap the picture but don’t look at it.  I want to see that with him.  What’s he do, snaps the picture, leaves his route book sitting at the bonus and walks to the bike.  Thankfully he realized it before he rode off to the next bonus.  1/4 mile walk back and NOW he can proceed.

Weather is spectacular he says, snow capped mountains around, and riding weather in the 70’s.

Tonight Chris is getting a good rest.  He hit every bonus that he had planned for the day, and really enjoyed riding through the mountains.  Morning started off at 45 degrees, which rose to 102 degrees.  By this evening the weather was perfect he said, and he had fun.  Tomorrow he will continue along his route leading him back to Albuquerque for check in.

Chris’ schedule fell a little off track because of the mountain roads, one of which was about 15 miles of dirt road.  Gotta ride a little bit slower than the highway.    Today he rode over some “crazy wild” road in Colorado, over the mountain, with hard switchbacks for about 20 miles.  When I asked where in Colorado he had no idea where it was.

Another boatload of Deer

And free range cows in the road

His low beam headlight went out somewhere on that dirt road.  But still no rain.  Keep your fingers crossed.  He’s due at Checkpoint #1 at 8:00 pm mountain time.  Hopefully will get some food and rest while waiting for Leg #2 to begin.

Closing in on Checkpoint 1

Earlier today Chris rode through a herd of about 20 open range horses. Mostly mothers with their colts still wobbly on their legs with their elbows and knees buckling under them. He came to a stop in the road to watch a mother move her colt from the road, starting gently and when the colt wouldn’t move, more forcefully nudging it along.

He also encountered a motorcycle touring company with a group of riders, not once, but twice as he came and le…ft a bonus off a winding road.

Last conversation he was approaching Shiprock NM, where he says it looks like the Emerald Castle from the Wizard of Oz.

He’s out of telephone range (at least its still working) as of now, but he should arrive at Checkpoint 1 within an hour or so.

When it rains, it pours, figuratively speaking.

Seems that one problem, the low beam headlight, was the least of the problems. About 100 miles from Checkpoint #1 BOTH of Chris’ GPS’s went dead. He used his telephone mapping to finish returning to the hotel.

So lets diagnose:…
Headlight: tried to replace the bulb and lost some sort of clip to hold it in during the nighttime change out. Dealership this morning believes the housing is actually broken. They made some repairs and this problem solved, we hope.

GPS: Chris’ older Garmin 550 had been giving him difficulties so he purchased the 650. Its less than a year old. It looks like the battery, when charged by itself can hold a charge, but when he reinstalls the battery in the GPS, doesn’t work. When he mounts the GPS in the bike cradle, doesn’t work. Baffling, and of course Garmin is closed for the holiday weekend.

Routing by cell phone can be done, unless he gets in an area without cell coverage. Thought of downloading a geo-cashing app to the phone, no iTunes service where he is now.

Paper maps: not sure this is a good option. Paper maps may not show all the small dirt roads he might need to get to the bonus.

The brain can only process so much. So in all the analyzing for the headlight and the GPS’, Chris inadvertently did not claim two bonus locations, missing out on 800 points, leaving Chris in 14th place. Its questionable whether he can continue or not at this time.

Headlight. Turns out the housing for the headlight is broken. Sandia BMW was great at helping Chris. They got the bulb replaced and it seemed to work, but who knows how long this would last.

As for the GPS issues, they continued to plague Chris throughout the day. The 665 was totally dead in the water, and his old 550 sporadically would freeze up when connected to power. So both GPS’ turned out to be of no use.

Cell phone. Hard to read and kept losing service. Never got to an area where he could download the Garmin GPS App and try that as his last resort.

There seemed to have been more electronical issues than just the GPS. The cell phone, and his music is not working as well.

Chris called the Rally Master, Lisa Landry, to inform her that he was withdrawing and heading home. After some discussion they both agree that attaining the minimum requirements to be a finisher of the rally would be extremely difficult at this point.

Sorry Lisa, won’t see you at the finish. See you in November.